Growing hydro or hydroponic marijuana is now one of the most popular and effective ways to grow indoors. Its main advantage is increasing the yield potential of the crop. It does this by delivering the marijuana plant with maximum nutrients several times a day. Hydro setups also reduce the chance of pests and mean that a garden does not need to be tendered every day. 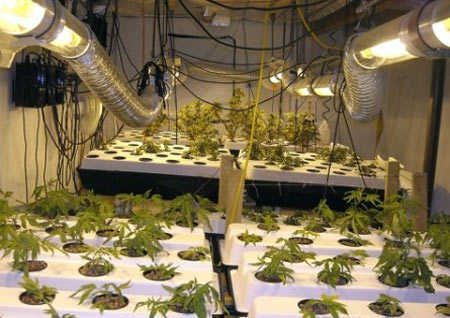 The most common way of growing marijuana hydroponically is to use a reservoir which is set below the bottom of the plant pots (pots are usually raised). The reservoir is filled with water which has been mixed with nutrients. The nutrients are fed to the plants via tubing and with the help of an aquarium pump. The pump is connected to a timer. Around six times a day the timer turns on and waters all the plants for around 5-10 minutes. The nutrient rich water drains through the pots and back into the reservoir via plastic tubing. This process is continuous.

Marijuana plants grown hydroponically do not use soil, instead perlite, rockwool, or vermiculite are used on their own or in combination. These mediums increase drainage and do not log the nutrients in like soil would. Pots are connected to the reservoir and the nutrient mix simply goes in the top and out the bottom.

Active systems move the water using mechanical devices in order to deliver it to the plants. There are many variations on active systems but most of them fall into one of three categories: flood systems, drip systems, or nutrient film systems.

The flood system is the type of unit that most people think of when marijuana hydroponics is mentioned. The system usually has a reservoir which periodically empties to flood the container or tub holding the medium. The medium holds enough moisture between irrigations to meet the needs of the plant. Older commercial greenhouses using this method often held long troughs or beds of gravel. Today, flood systems are designed using individual containers. Each container is attached to the reservoir using tubing.

A simple flood system can be constructed using a container with a tube attached at the bottom of a plastic container (pH: that which the plant is placed in) and a jug. The tube should reach down to the jug, which should be placed below the bottom of the growing container. To water, the tube is held above the container so that it doesn’t drop. The water is poured from the jug into the container. Next, the tube is placed in the jug and put back into position, below the growing container. The water will drain back into the jug. Of course, not as much will drain back in as was poured out. Some of the water was retained in the growing unit.

Automating this unit is not difficult. A two-holed stopper is placed in the jug. A tube from the growing unit should reach the bottom of the reservoir container. Another tube should be attached to the other stopper hole and then to a small aquarium-type air pump which is regulated by a timer. When the pump turns on, it pushes air into the jug, forcing the water into the container. When the pump goes off, the water is forced back into the jug by gravity. Several growing units can be hooked up to a large central reservoir and pump to make a large system. The water loss can automatically be replaced using a float valve, similar to the ones used to regulate water in a toilet. Some growers place a second tube near the top of the container which they use as an overflow drain.

Another system uses a reservoir above the growing container level. A water timing valve or solenoid valve keeps the water in the reservoir most of the time. When the valve opens, the water fills the growing containers as well as a central chamber which are both at the same height. The growing chambers and the central chamber are attached to each other. The water level is regulated by a float valve and a sump pump. When the water level reaches a certain height, near the top of the pots, the sump pump automatically turns on and the water is pumped back up to the reservoir.

With this system, growers have a choice of mediums, including sand, gravel, lava, foam or chopped-up rubber. Vermiculite, perlite, and styrofoam are too light to use. The styrofoam and perlite float, and the vermiculite becomes too soggy.

The plants’ water needs to increase during the lighted part of the daily cycle, so the best time to water is as the light cycle begins. If the medium does not hold enough moisture between waterings, the frequency of waterings is increased.

There are a number of companies which manufacture flood systems. Most of the commercially made ones work well, but they tend to be on the expensive side. They are convenient, though. 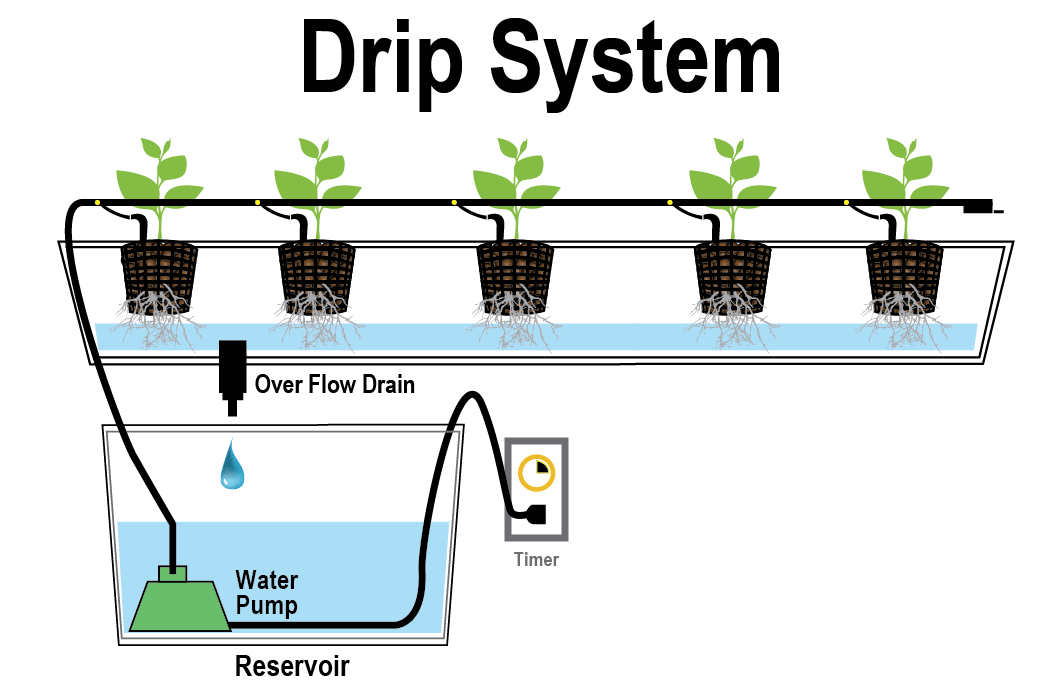 Years ago, the most sophisticated commercial greenhouses used drip emitter systems which were considered exotic and sophisticated engineering feats. These days, gardeners can go to any well-equipped nursery and find all of the materials necessary to design and build the most sophisticated drop systems. These units consist of tubing and emitters which regulate the amount of water delivered to each individual container. Several types of systems can be designed using these devices.

The easiest system to make is a non-return drain unit. The plants are watered periodically using a diluted nutrient solution. Excess water drains from the containers and out of the system. This system is only practical when there is a drain in the growing area. If each container has a growing tray to catch excess water and the water control valve is adjusted closely, any excess water can be held in the tray and eventually used by the plant or evaporated. Once a gardener gets the hang of it, matching the amount of water delivered to the amount needed is easy to do.

One grower developed a drip emitter system which re-uses water by building a wooden frame using 2×4’s and covering it with corrugated plastic sheeting. She designed it so that there was a slight slope. The containers were placed on the corrugated plastic, so the water drained along the corrugations into a rain drainage trough, which drained into a 2 or 3 gallon holding tank. The water was pumped from the holding taink back to the reservoir. The water was released from the reservoir using a timer valve.

The best way to learn more about hydroponic marijuana growing is to buy a good book and a system and get started.

A word of caution

It is very important when growing hydroponically to make sure there are no leakages. Any leakages can result in a serious room flood and a dead crop.